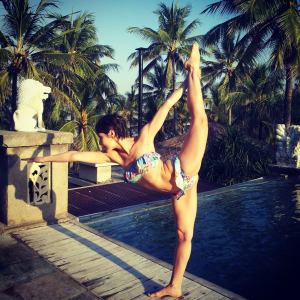 After a car crash that left me with a severe neck injury I found myself seeing a physio twice a week for years. I was constantly complaining to a work colleague and she suggested I try Bikram yoga.  I had nothing to lose so I went to my first class that week in Aug 2006.  During my first class I remember having thoughts like “wow it’s hot” “this is hard” “I am sweating so much” “is this yoga??” But by the end I really felt fabulous. I was so tired, yet full of energy.

Previous to my car accident I was very athletic doing aerobics and running but felt like this was such a better workout. I began to practice 2 or 3 times a week while I studied Speech pathology at Flinders which quickly turned into a part of my daily routine. By 2008 I participated in the National Yoga Championship. Training for the competition involved practicing the beginners class at least 4 times a week and also practicing his advanced series twice a week. The competition for me was a great opportunity to improve my practice in a way it never had before and I also met other like-minded yoga practitioners who were, to me, inspirational. To my surprise, I won the Australian Championship and had the opportunity to compete at an international level with some amazing people from all over the world.

In Sept 2010, I went to San Diego to complete my teacher training. I absolutely loved teacher training, I enjoyed practicing twice a day and even more than that I enjoyed learning about the yoga, the Bikram Yoga sequence, the benefits, the dialogue and the mind and body.

Over time my love for teaching grew just after 3 years of teaching I am part owner of a beautiful studio by the beach in Adelaide.  It has been operating now for the past 18 months. One of the things I love about the studio is seeing how the yoga helps many. In different ways and for different reasons we see every day how the yoga helps people. Whether it is physical, mental or emotional benefits, one of the most rewarding things about being a Bikram Yoga teacher is seeing those transformations in people.